The Scientific and Historical Underpinnings of EMS

Electrical muscle stimulation (EMS), or electromyostimulation, has gotten a lot of press in recent years for a wide variety of reasons.

EMS works by using pads that adhere to the skin, which then facilitate electrical signals from the device to the user’s body. The impulses imitate the action potential that originates from the central nervous system (your natural brain waves), causing the muscles to contract.

It can be used as a strength training tool for healthy people and athletes. It can also serve as a rehabilitation and prevention tool for people who are partially or completely immobilized. Likewise, it’s great as a testing tool for evaluating neural or muscular function and it can also be used as a post-exercise recovery tool for athletes.

With the number of benefits an individual can reap from an EMS session, it begs the question: How did EMS actually come to be? To answer this, let’s walk through the science and history behind EMS.

Electric muscle stimulation was used for the first time around 500 BC.

Egyptians learned that certain fish release electrical impulses almost 2,000 years ago, and these fish were utilized to cure pain. The Greeks and Romans did the same thing, using the electrical capabilities of fish like the electric ray to treat a variety of diseases.

Millenia later, in 1745, German physician Christian Gottlieb Kratzenstein published the first book on electrical therapy, claiming that electrical current could be used to move muscles. This would later prove to be a springboard of sorts for two prominent Italian physicists—Luigi Galvani and Alessandro Volta.

Galvani’s growing interest can be seen in his lectures on the anatomy of the frog in 1773 and in electrophysiology in the late 1770s, when, after acquiring an electrostatic machine and a Leyden jar, he began to experiment with muscular stimulation.

He is credited with a number of creative discoveries and experiments, including obtaining muscle contraction in a frog by tapping its nerves with a pair of scissors during an electrical storm in 1786.

A visitor to his laboratory caused the legs of a skinned frog to kick once again when a scalpel was placed on the animal’s lumbar nerve while a piece of electrical equipment was turned on. Further studies convinced Galvani that the twitching was indeed related to the electrical action.

He came to the conclusion that animal tissue possessed a natural, living power, which he dubbed “animal electricity,” which activated nerve and muscle when metal probes were stretched.

In 1794, he published an anonymous treatise called Dell’uso e Dell’attività Dell’arco Conduttore nella Contrazione dei Muscoli (On the Need and Activity of the Conductive Arch in Muscle Contraction), which included a supplement that detailed muscular contraction without the use of metal.

The parallel between the muscle and the Leyden jar did not impress Alessandro Volta, a distinguished physics professor at the University of Pavia.

He believed that the contact of dissimilar metals was the true source of stimulation, and that the muscle, by contracting when touched by metal, resembled the action of an electroscope.

Additionally, Volta argued that, if two dissimilar metals in contact both touched a muscle, an agitation would also occur and increase with the dissimilarity of the metals. As a result, Volta dismissed the concept of an “animal electric fluid,” claiming that the frog’s legs responded to variations in metal temper, composition, and bulk.

Galvani and Volta’s work, while not entirely accurate at the time, led to the discovery of new scientific domains.

More importantly, however, Galvani and Volta paved the way for fresh study in muscle and nerve physiology, as well as the entire field of electrophysiology.

The nineteenth century and beyond

In the 19th century, the Faradization technique, an early kind of electrical stimulation therapy used to effectively treat motor paralysis in patients, was developed.

Electrical stimulation therapy was first used in London hospitals in 1840, thanks to physicist and chemist Michael Faraday’s investigations of electromagnetism.

Later, in the 1860s, The Medical Battery Company, Ltd. created the Electropathic Battery Belt, or Ab Belt, which is strikingly similar to today’s EMS devices and therapies.

Researchers explored and documented the specific electrical qualities that cause muscle movement in the 19th and 20th centuries. The bodily functions generated by electrical stimulation were discovered to cause long-term modifications in the muscles.

Other electrical muscle stimulation devices appeared around the turn of the 20th century. Many of these technologies were large, cumbersome, and difficult to move, and they provided effective but uncomfortable electrical stimulation.

From 1920 through the mid-1960s, physicians began to use early EMS equipment to treat a variety of acute and chronic ailments.

The 1976 Montreal Olympics marked a watershed moment in the history of electrical muscle stimulation. Dr. Yakov Kots, a Soviet scientist, was one of the first to advocate for the use of EMS in sports, specifically to improve the fitness of USSR Olympic athletes.

In his EMS application, Kots used a 2500 MHz frequency that became known as the Russian Stim, or Kots Current. His research and applications revealed that this particular electric current helped sportsmen gain muscle while also increasing fast-twitch muscles for increased speed. 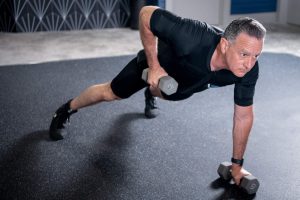 These studies were shared with Western sport establishments during conferences in the 1970s. However, the outcomes were mixed, possibly due to a lack of understanding of the processes through which EMS works.

At present, electrical muscle stimulation may be found in a wide array of uses⁠—rehabilitation medicine, sports science, and, you guessed it, physical fitness.

Electrical muscle stimulation is still used by many of the world’s top athletes to supplement their training. However, it cannot be denied that it is now more available than ever to a broader, more widespread audience.

EMS is also quickly becoming a popular way to achieve a healthier and more toned body since it allows users to receive the benefits of a full-fledged workout in half the time needed via a traditional workout.

Send us a message at We202 if you’d like to learn more about how this groundbreaking training program works and help us help you reach those fitness goals of yours!

Whether you are looking to achieve a tone body, lose weight, build muscle, increase your metabolism, relieve body pains or to rehabilitate from an injury, all while saving time, We202 is the right program for you.